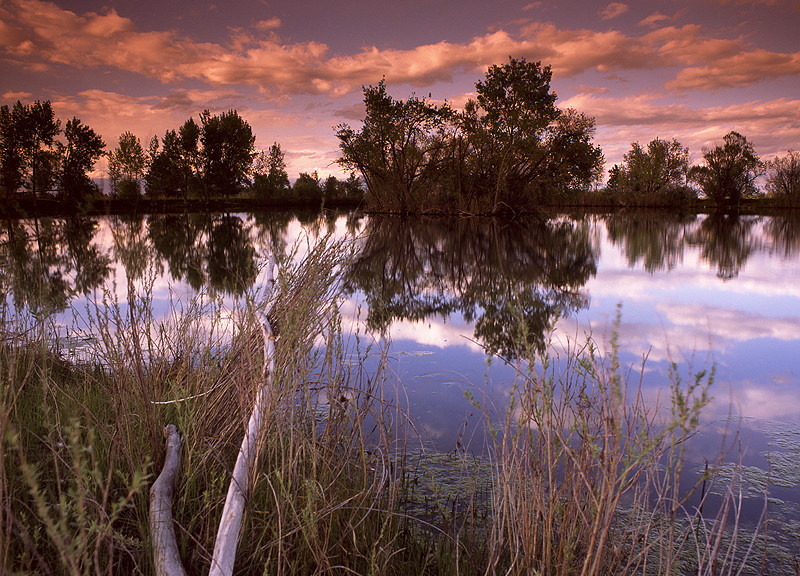 It is a little ironic that this post follows one where I talk about how much I think a black and white photograph is more artistic than a color photograph. Like I said before, I like color photographs too, and this post proves it. I live in an area that has a lot of “Open Space” land. Open Space is where a local government acquires land and sets it aside as recreation or wildlife habitat or both. So, lucky for me I have hundreds of shooting locations to pick from, all within 15 miles of my house.

I have been wanting to try an experiment using color film for awhile now. I wanted to see how slow of a shutter speed I could get in a full sun situation. I needed some clouds and water to get the long exposure look I wanted, and I knew of an open space that was five minutes from my house with a cool pond that has a little island in the middle.

One Sunday a few weeks ago around 3:00 I found myself with a couple of hours to burn. So I took the opportunity to get out to this location and try my experiment of long (ish) exposure in full sun. I gathered up my gear, this time it was my Mamiya 645 1000s and a 45mm wide angle lens. For film stock, I had some Kodak E100vs in the deep freeze just screaming to get out. When I shoot color film I love to shoot transparencies (slides). I mean nothing beats a perfectly exposed chrome.

Now, to slow the shutter speed down, I was starting at ISO 100 with my film. Except the film was expired in 2008, so using an ISO of 50 gets me closer to a true film speed. That helps, but not enough. I knew I wanted to use a polarizer filter, and I had a 3 stop ND filter that would stack together. That adds about 4 stops of exposure. Now it’s getting closer to what I need for an exposure around 1 sec in full sun.  To keep the sky in check I will add a ND grad filter and I had a nifty graduated warming filter to add some drama to the sky. Why not, I don’t shoot color that often.

With my gear packed up and a couple of rolls of film thawed out I headed over to the location. After parking the car and pulling out the gear I had about a 1/4 walk to the pond. I entered through the gate and started off. I was immediately met with a herd of cattle. The whole heard was on my path, standing there starring at me. Like cows do.  So I stopped and tried to waive them off. They didn’t move. Now that I had all of their attention they got curious and started to move in and surround me. They must have thought I had a bail of hay in my pocket. Before I was totally surrounded I headed off across the pasture and gave up on the path.

Once I got to the location it was clear that I would need all the tools I brought to get the shutter speed down. I set up next to the pond but made sure I kept my distance. There are about 4 or 5 blue heron nests on this little island and I didn’t want to spook them. Lucky for me I was able to hop a crude barbed wire fence that keeps the cows out of the water. That kept them out of my camera bag while I was shooting.

So there I was all set up. My Mamiya on a tripod, loaded with Kodak E100vs rated at ISO 50, Polarizer, ND filter, ND Grad filter, and a graduated warming filter to top it off. I bracketed exposures to make sure I was going to get what I wanted.

In the end the shot that turned out like I had envisioned was shot at 1 second @ f/22. To the naked eye the water had a little wave action due to some slight wind and the clouds were hung in a clear blue sky with lots of sun. The long exposure was able to flatten out the water so it has a mirror like surface and the clouds have just a little movement in the image to add some drama to the sky. One thing to note is that this image is not digitally altered. I always strive to get everything I want in camera. Overall I was pretty happy with how the final image turned out.

My passion is for Black and White photography but sometimes I have to branch out and play around with some color.