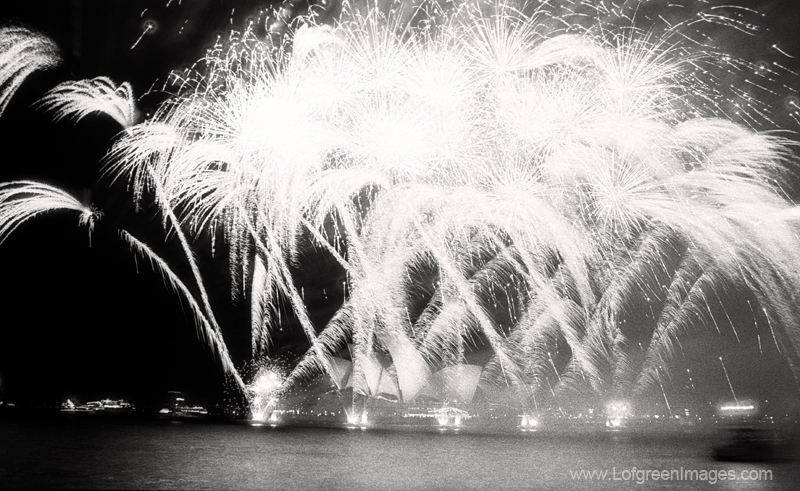 From my previous post I talked a little bit about a long international trip I took in January. The trip took me to Buenos Aires and Sydney for two weeks of client meetings for my day job. Because I had to pack so light I was limited in how much gear I could take along with me. See my last post on what I took along here.

While planning  my meetings I discovered that I would be in Sydney for the 200th celebration of Australia Day. I had no idea what Australia Day was so I did some research and discovered it is similar to the 4th of July in the U.S. “What luck” I thought, “Maybe I could get a killer night shot of fireworks going off over the Opera House!”. That was my plan…

So I began planning my shot by looking at google maps and satellite views of the area looking for good vantage points. They all had to be within walking distance from my hotel since I would be on foot for the entire duration of my stay in Sydney. There are several vantage points in which I could have chosen to shoot from but I narrowed it down to three. I would scout the area before Australia Day to make my final selection.

Now, when I arrived I was able to get to my selected sites and asked some colleagues where the fireworks would be set off from. Turns out this was billed as the largest fireworks display in the world, ever. So I got pretty excited. The plan was for barges to be towed around the whole peninsula that the Opera House sits on in Sydney Harbor. Now I knew what spot I was going to shoot from.

Australia Day arrived and the whole harbor and downtown areas were packed with people celebrating. Wall to wall people, eating, drinking and shopping the temporary craft and art stands that popped up all over. Street performers, corn cob stands and all sorts of carnival type food could be seen every where. The parade of boats in the harbor was so neat to watch. There were tall ships sailing by, followed by fire fighter tug boats spouting water and all sorts of people waving from their boats to everyone on the harbor walk.

With all of the people and commotion going on I thought I had better get my spot staked out well before others get there to get the spot for a shot of there own. So, I gathered my gear up and headed out to a little spot close to the ferry station, across a little stretch of water where I had a clear shot of the Opera House.

I have had several experiences photographing fireworks in the U.S. So I sort of had this image preconceived in my mind. With that goal in mind I chose my 24mm wide angle lens. This would give me enough coverage to get the reflections of the fire works in the water and the fireworks streaking across the night sky. The weird thing was, the closer it got time for the fireworks  the less people there were. Just before the fireworks were supposed to go off I looked around and there was hardly anyone around. Just me and some folks from Georgia. Who knew!

I was ready. Camera on the tripod all set to capture the blossoms of fireworks as they went off one by one. Except… in Australia they set all of them off almost at once! OMG, I was blinded with fireworks filling my view finder! Wow. So, I had to scramble and adjust what I thought would be a good exposure time and start guessing at what I should set my shutter speed to. I got six frames off. Thats it. 6. The fireworks were over.

Needless to say, I didn’t get any thing like I was hopping for. All the preparation I put into it and zip. But you know what? I had a blast doing it. Sometimes that is how it goes with photography. I am so glad I got to be there and share with the Australians in their celebration no matter if I got my shot or not. Photography can be more about experiences than about the capture.