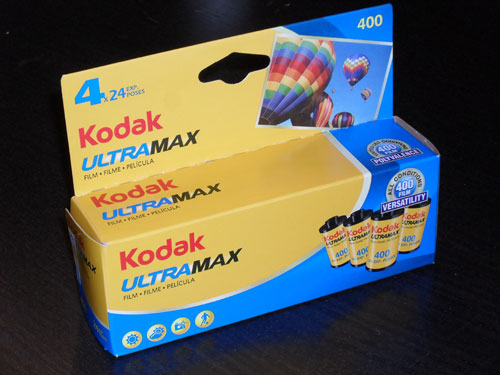 This is a re-post of an article I had on my old blog site. It was a popular one even though it wasn’t about black and white film photography. Whenever I can I like to encourage new photographers to try film and this article is a good example of how to get really good images from some really cheap film. Because this was an older post some of the links to external sites may not work.

I have a few more posts planed around how to shoot, process, print, scan and the whole film workflow in coming posts, so check back soon. Enjoy the re-post.

Disclaimer: This is not a scientific test, my results may be different than yours and results may vary.

I have ordered some of the new Kodak Portra 400 film and can’t wait to give it a spin. I have seen some posts on a few other blogs that have shown how wide the exposure latitude of the new film is. You can see some good examples over at Twin Lens Life. They are some great film shooters in the Riverside area. I have also seen a test of Fuji X-tra 400 consumer film that showed how much exposure latitude it has over at Figital Revolution. All films are different and behave differently, that’s the beauty of film. Knowing what you want to get right out of the camera and knowing what film will get you there instead of working for hours in photoshop to get there is a great way to work.

For my example I chose to shoot with some Kodak Ultramax 400. It’s easy to get your hands on and I figure that if someone wanted to start shooting film for the first time, or go back to it for kicks, they would be likely to pick some of this up and start shooting. It breaks down to about $2.50 a roll, not expensive and easy on the wallet.

What I did on my first roll is to expose the first frame at 50 iso and then move each frame after that up one stop, all the way to 6400 iso. I did this so I could find the “sweet spot” to set my iso on my camera. You might be saying “But the box says 400 iso, don’t you set it at 400?”. The short answer is maybe. Just because the box speed says 400 doesn’t mean that you get the best results at 400. In the other examples from Twin Lens Life and Figital Revolution you can see that the films performed really well at just about all speeds. That’s right, you can shoot those films like you can with digital and move the iso around! The Kodak Ultramax however, doesn’t perform so great at 400 or higher (again these are my results, yours may be different). You can see my examples below.

As you might be able to see, 400 iso is about the max this film can shoot at. It seems that the film starts to flatten out in contrast and the grain starts to get bigger at 400 iso. If a person didn’t know this and was excited to “try film” and shot this at box speed they might be a bit disappointed and think that all film looks like this. Now that I know how this film behaves with my shooting style and camera system I will be shooting this film at 100 iso not 400. The grain structure, color saturation and the blacks seem to be real nice at 100 iso and it still gives me about 2 stops + or – for error and I will still get a nice exposure. If you want to get into shooting film and you chose this film just for “testing it out” you would probably be better off setting your iso at 100 or 200 to start out. I think you will like your photographs more and it wouldn’t discourage you from shooting some more.